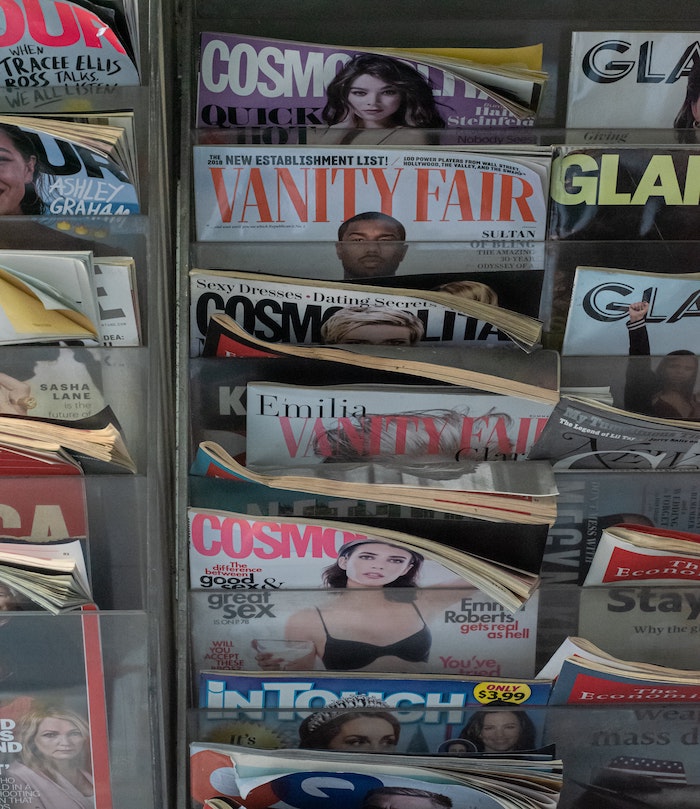 A brave time to start a magazine?

With a bottomless pit of online content to compete against and climbing production costs why be in print? Magazines typically survive by running multiple paid-for ads which can fill around two-thirds of a publication’s pages. This definitely puts the squeeze on space for good editorial, further jeopardising the magazine’s success. Is another model possible?

Journalist Lauretta Wright is now making a career running her own magazines that put community interests above advertising spend. A massive fan of print for the tangible way its look, feel and smell engage the senses and grab the reader, she believes community-based publications are a viable business if done the right way.

There are currently two monthly people-centred magazines in her LifeIn series that run the tagline inspiring a community one page at a time. Sticking with the adage of write what you know, Lauretta began her first title around three years ago for her home town and expanded into a second sister location in March 2022.

So, how do you start your own magazine and not make it a massive money pit? Lauretta explains it as one of the most scariest times. “I walked Orpington High Street [Kent] for about three weeks with just a concept. Calling into businesses, I had no magazine to show them at that point. I was asking them to believe in me and the model, to pay for advertising in what would become my first issue. Without that I couldn’t afford to start.”

There were many who said no but all it took was one person to believe in the idea to keep her going. Only three months after her first cold call, issue number one went into print. Being relentless is what made it happen. In comparison, the launch of the Bromley title was so much easier, with a physical copy of the Orpington magazine to show to prospects. 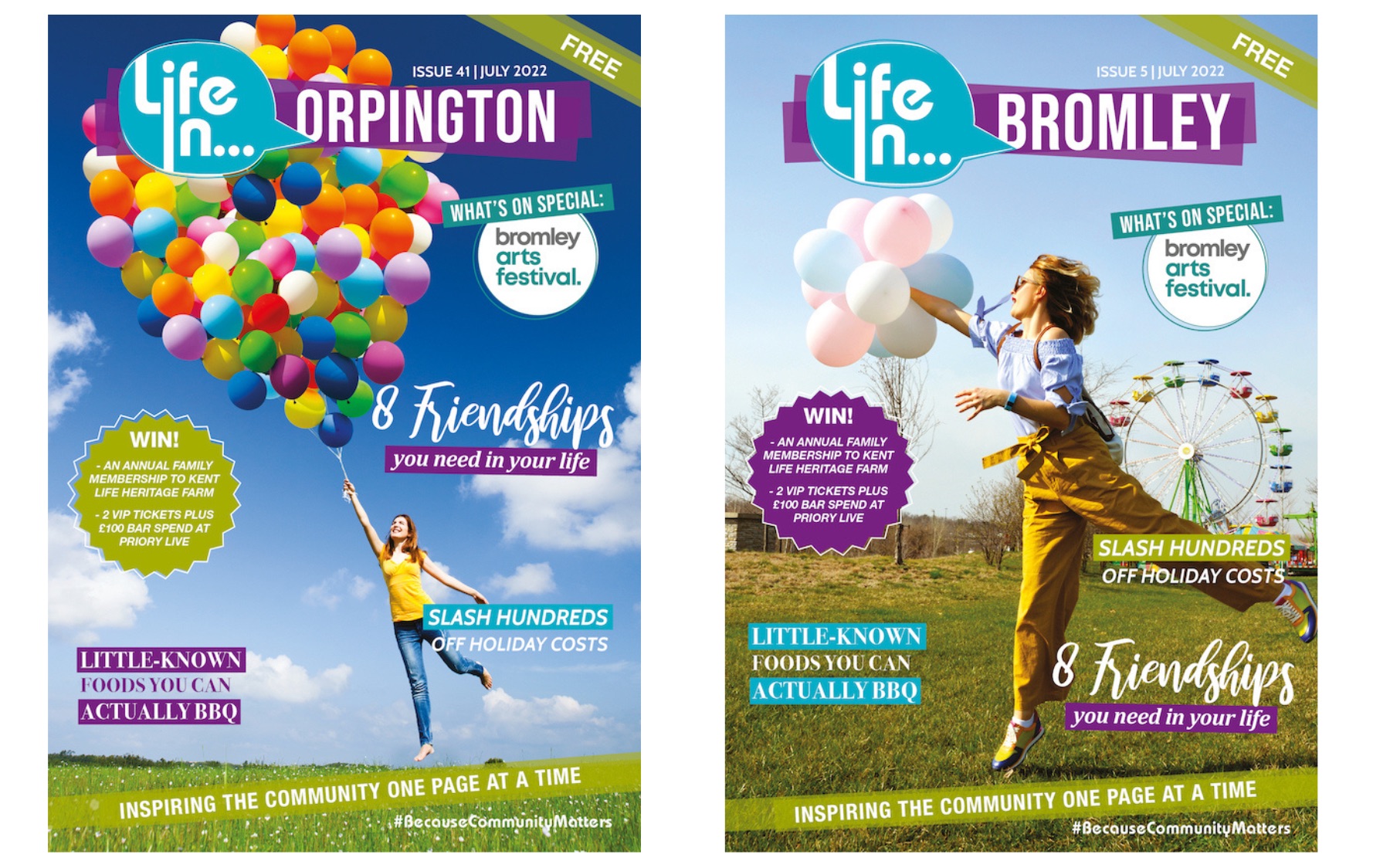 The reality is many community titles have to follow a directory model to get into print at all. This means forfeiting editorial space to run a very high proportion of small ads. Determined to avoid this, Lauretta’s goal is to never commit more than 50% of page space to advertising. A bold step when margins are tight.

Only three months after her first cold call, issue number one went into print. Being relentless is what made it happen.

“When I’m balancing the books I’ve got to be mindful of how much advertising revenue I bring in. I need it to cover my overheads, that’s my income, printing and website costs, social media outlay and design. Having the 50% limit puts me and the publication under even more pressure to be successful but I truly believe that the strategy is a major asset to the publication and contributes to its reader popularity.”

And the model definitely seems to be working. Reader feedback is proving very popular and now bigger local businesses are choosing to advertise with LifeIn. Contributions from regular columnists now free Lauretta to write about 80% of the monthly editorial, and contributions of short stories and life hacks are scheduled in for the next six issues.

Education without the advertising

Over on the other side of the country another magazine has also been flourishing, and this time there’s not a paid-for ad in sight.

Wicked Leeks is produced by Riverford, the UK organic veg box farmer that now carries a product list extending way further than fruit and vegetables. Under the guidance of founder Guy Singh-Watson, they have valued informing customers about the current condition of their produce, the environment and agriculture for 30 years and each veg box delivery comes with a card featuring updates and recipe ideas. 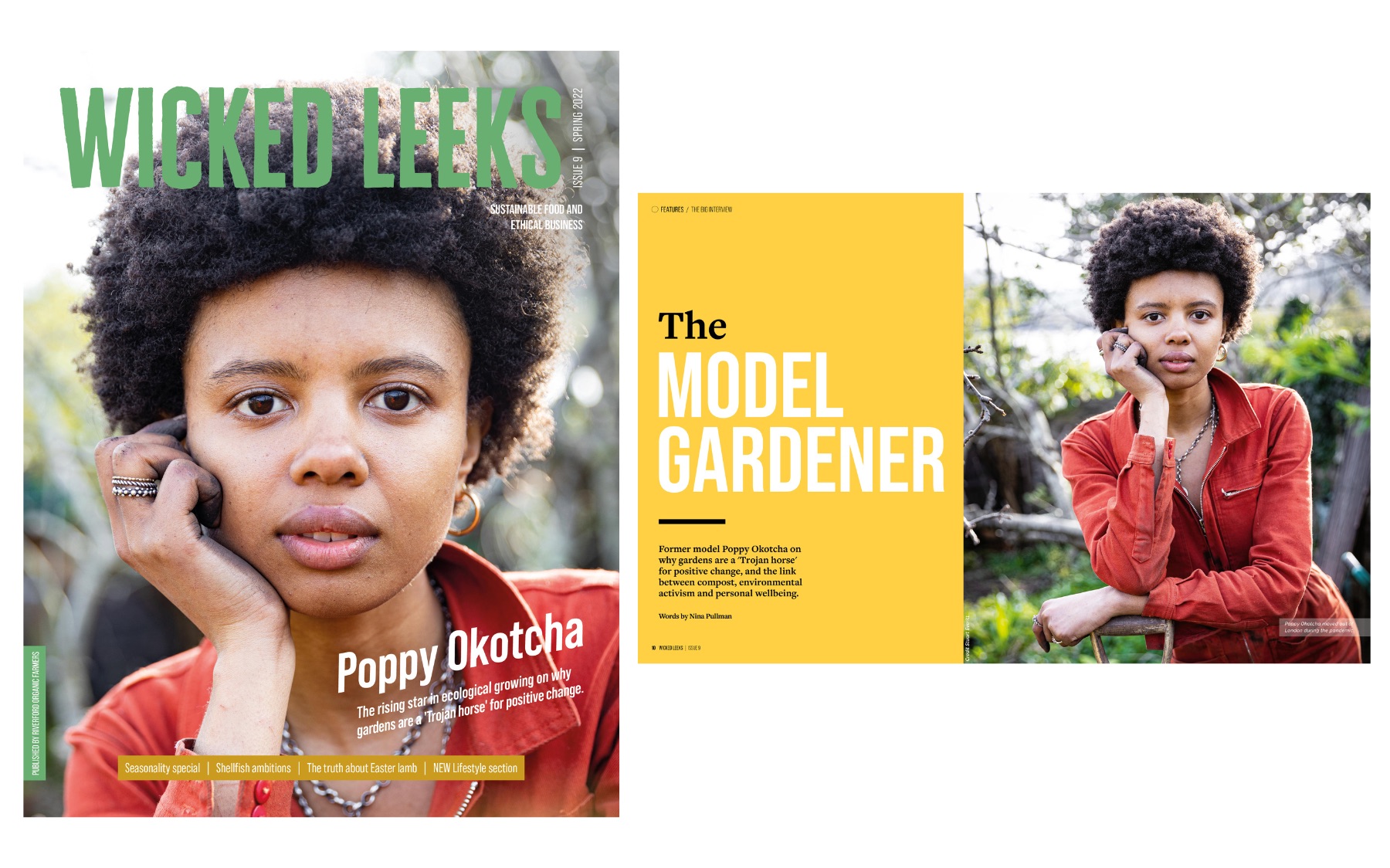 Since beginning four years ago, Wicked Leeks has carried no advertising except for a small number from Riverford as its publisher – usually a recent brand campaign or guest recipe box. Wicked Leeks editor, Nina Pullman, explains how it all came about. “Riverford is always looking for ways to inform consumer choice around food supply. In 2018, I spotted a gap in the market for quality food reporting and we began sending weekly emails to a new group of readers, a mix of Riverford customers and non customers, with stories covering sustainable food and ethical business. By the summer of 2019 interest was there for us to go into print with our first Wicked Leeks issue. The magazine is editorially independent, available to all and outward facing."

Each quarterly is a mix of food features, farming news, environmental factors and political topicality. No way fluffy, they ask the hard questions, choosing to be a line in the sand and educate readers. The 60,000-copy print run is mostly distributed to veg box customers for now, with online news coverage on the Wicked Leeks website hitting up to 15,000 views a week.

Wouldn’t online only be easier…

At LifeIn Lauretta knows first-hand that having a physical magazine is definitely harder to finance. Recent months have seen print costs for their 14,000 issue run go up by 46% due to UK paper-mill closures forcing the costs of imported paper to be passed on.

Swelling the magazine’s circulation to 17,000 via digital issues online at the LifeIn website is an important part of increasing the magazine’s reach but getting the pages into the hands of readers is the main priority. “I just don't think editorial will ever be 100% online, not in my lifetime anyway. There will always be a need for print. Unlike reading on your phone, your magazine is never going to run out of battery.”

Regularly approached by writers, journalists and authors with expertise in food and environment sectors, Wicked Leeks now has a pool of regular freelancers who write for both print and online.

Online is the primary way of distributing Wicked Leeks stories, where between five and seven are published every week with a range of news, opinion, features and lifestyle. Regularly approached by writers, journalists and authors with expertise in food and environment sectors, Wicked Leeks now has a pool of regular freelancers who write for both print and online.

Riverford so far has fully funded Wicked Leeks and so removed the need for outside advertising. As a marketing vehicle, the magazine is mostly circulated to current customers and sales reps who are encouraged to share issues as widely as possible. The title may organically grow veg box customers this way but for now it’s not its primary function, being valued far more as a distribution method of information and education among a like-minded community.

The magazine has gone through a re-brand since its first issues, now carrying a look and feel that is less text dense and more image rich. The effect now a contemporary magazine with an accessible design that would look the part on any coffee table rather than a special-interest newsletter.

And what of the environmental implications
Thankfully, both magazine producers are very aware of the environmental impacts of their print publications. Printed on 100% recycled FSC certified paper, harvested only from sustainable forestry, even the ink used is vegetable based. Wicked Leeks have also felt the rise in printing costs recently, with their 60,000 run per issue now costing 30% more but their commitment to continue in print is unflinching, encouraging readers to pass copies on to prolong their life.And, at the local level, minimal waste is also the goal. For Lauretta it’s important that not one LifeIn magazine goes unread. When distributors refresh high street collection points with the latest issue any copies from the previous month are posted through local letter boxes.

So, can they continue as they are, mindful that earlier this year the Press Gazette reported that most of the UK’s 250-odd consumer magazines lost circulation during 2021.

Nina acknowledges print has taken a knock in recent years but strongly believes it won’t go away, with specialist titles being the ones to survive more strongly. Wicked Leeks is poised at an interesting time in its development. Taking stock of its success to date, it considers its future sustainability: whether becoming a paid-for title or taking on advertising may be a route to take. “At the moment we’re looking at all avenues, keen to continue to grow the impact of the magazine. There are various models out there and we need to work out what’s best for the title. We’re definitely keeping our options open at the moment.”

With two titles under her belt what’s Lauretta’s view of the future? “I’m still finding my feet with title number two but I’m ambitious for more. I need to get the model right and reach my ideal 50% advertising target. At the moment, my drive to include popular editorial can leave me a bit short on space for ads but I’m getting there. Magazines like mine are a lot of hard work to produce but extremely rewarding.”

Many thanks...
I’d like to say a huge thank you to editors Lauretta and Nina Pullman for sharing their many insights with me. It sounds like magazine production will flourish with their input and I wish them every success for the future. 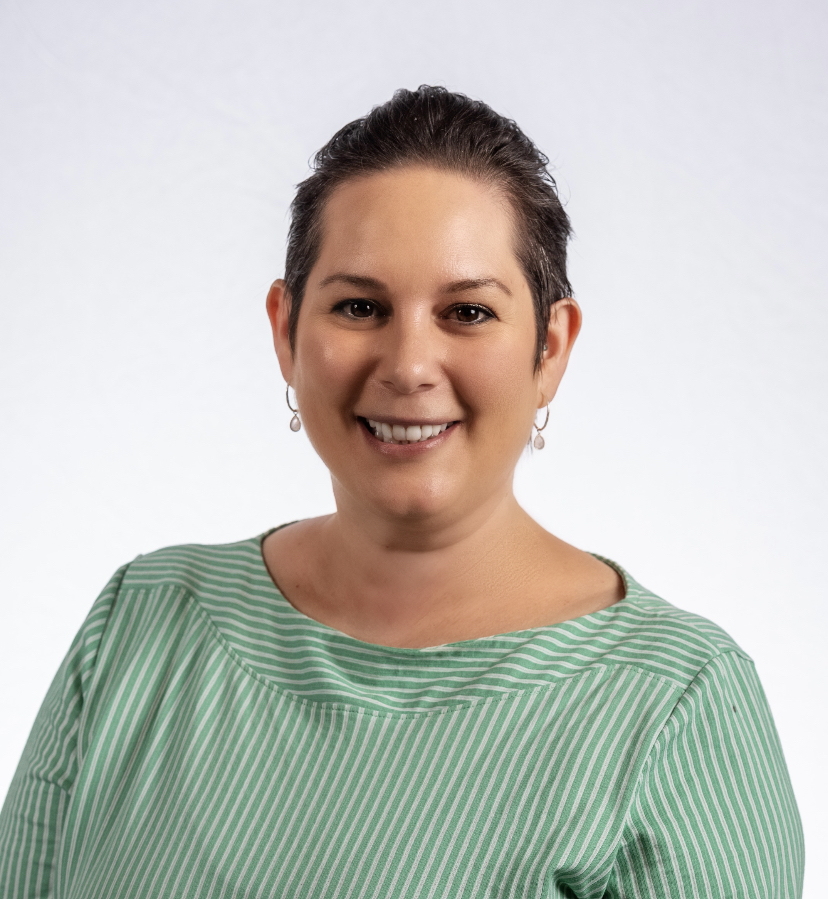 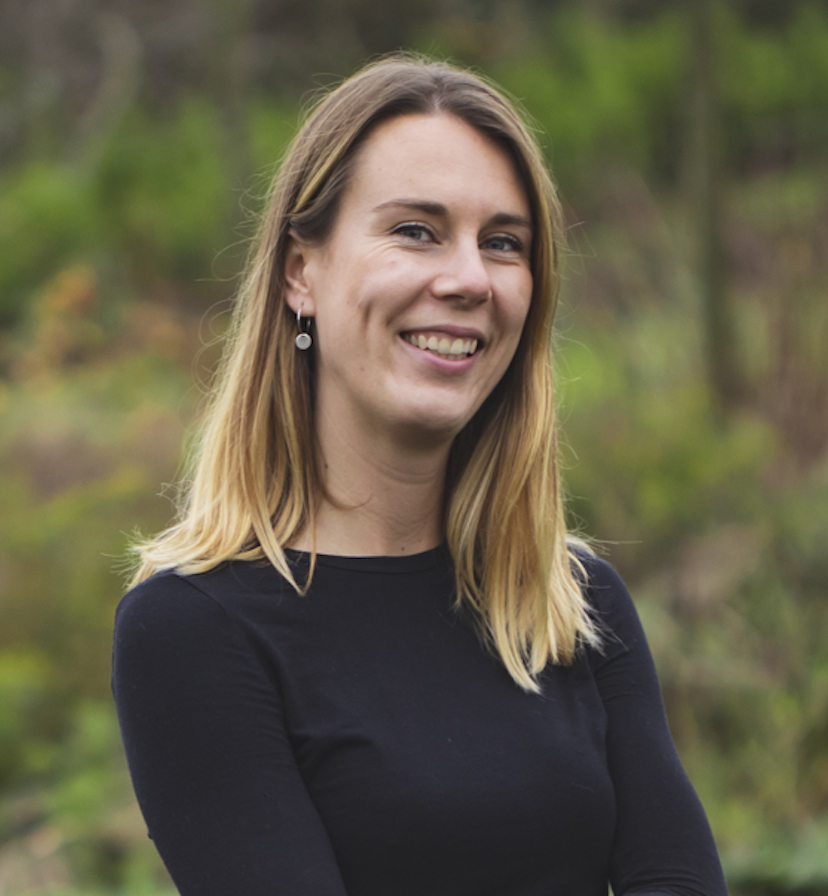